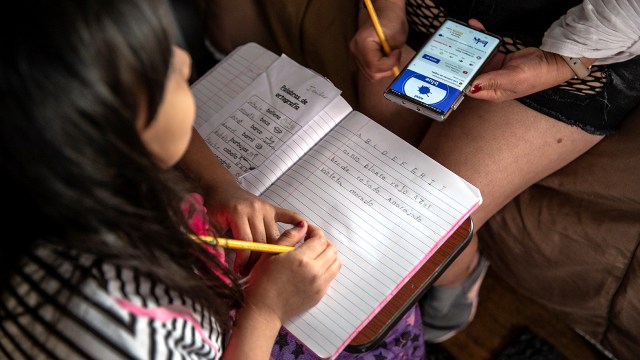 MINEOLA, NEW YORK – MARCH 30: A mother and daughter, 8, from Honduras, recovering from fever, study English on March 30, 2020 in Mineola, New York. The third-grader, has been out of school for several weeks, although because the family has no internet, she has not been able to take part in distance learning with her classmates. The nine immigrants who share the Long Island rental house self-quarantined after one became ill with fever, and the rest quickly followed. Most are largely recovered but never received tests for COVID-19. The coronavirus pandemic has been especially difficult for undocumented communities, who lack unemployment protections, health insurance and fear deportation if authorities know their whereabouts. (Photo by John Moore/Getty Images)