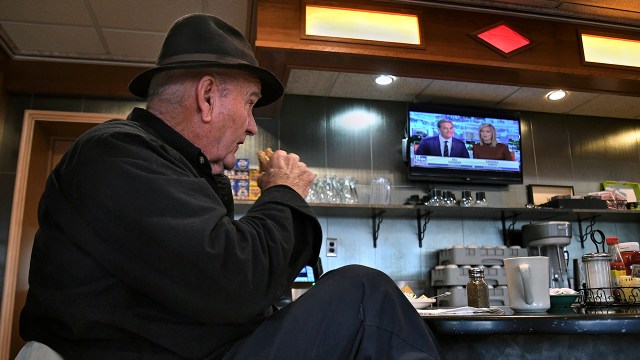 NAZARETH, PA- NOVEMBER 14: Jim Smith ate his breakfast sandwich as he watched the Fox News channel at the Nazareth Diner on November 14, 2019. He’s a regular there and gets this same spot at the diner early so he can watch the Fox & Friends show. He’s a Trump fan and thinks that the democrats don’t have a chance against him (Trump) next year. “He’s a master campaigner, and I also think he’s grooming his son (Donald Trump, Jr.) to run later.” Nazareth, Pennsylvania is working-class Democratic stronghold in the green hills of Pennsylvania Dutch country that voted twice for Barack Obama but then Nazareth flipped to Donald Trump in 2016, helping to deliver him the state and the White House. Now that Trump is facing a likely impeachment vote before Christmas, just about everyone here has a strong opinion about whether Congress should oust him. (Photo by Michael S. Williamson/The Washington Post via Getty Images)

Nazareth, Pennsylvania is Divided as to Whether They Want to Give Trump Another Term

Americans’ main sources for political news vary by party and age
Nazareth, Pennsylvania is Divided as to Whether They Want to Give Trump Another Term