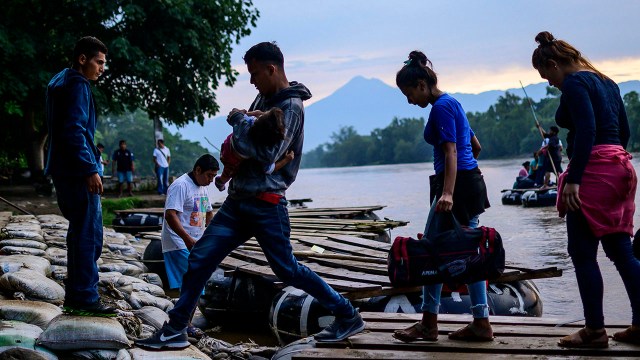 Central American migrants arrive in Ciudad Hidalgo in Chiapas State, Mexico, after illegally crossing the Suchiate river from Tecun Uman in Guatemala on a makeshift raft, on June 10, 2019. – In the framework of Mexico’s deal to curb migration in order to avert US President Donald Trump’s threat of tariffs, Mexico’s Foreign Minister Marcelo Ebrard said Mexico will discuss a “safe third country” agreement with the US — in which migrants entering Mexican territory must apply for asylum there rather than in the US — if the flow of undocumented immigrants continues. (Photo by Pedro PARDO / AFP) (Photo credit should read PEDRO PARDO/AFP/Getty Images)

Migrant apprehensions and deportations increase in Mexico, but remain below recent highs