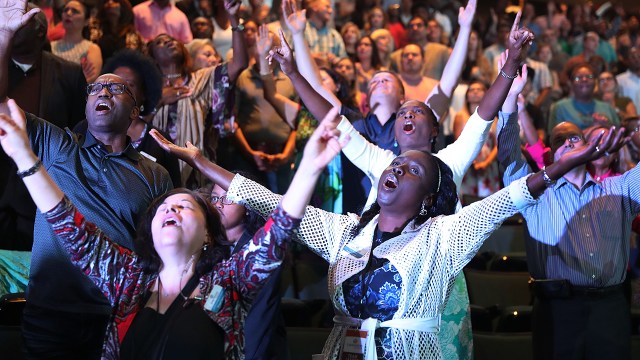 HOUSTON, TX – SEPTEMBER 03: Parishioners of the Lakewood Church led by Pastor Joel Osteen pray together during a service at the church as the city starts the process of rebuilding after severe flooding during Hurricane and Tropical Storm Harvey on September 3, 2017 in Houston, Texas. Pastor Osteen drew criticism after initially not opening the doors of his church to victims of Hurricane Harvey. Harvey, which made landfall north of Corpus Christi on August 25, dumped around 50 inches of rain in and around areas of Houston and Southeast Texas. (Photo by Joe Raedle/Getty Images)