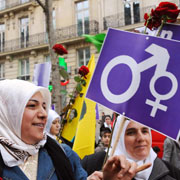 A Turkish woman holds a placard during a demonstration on March 7, 2009 in Paris, on the eve of the International Women’s Day. Conceived in 1910 and recognised by the United Nations in 1977, International Women’s Day on March 8 marks an ongoing worldwide battle to ensure equal rights for half the globe’s population on issues such as work, voting and abortion. AFP PHOTO BORIS HORVAT (Photo credit should read BORIS HORVAT/AFP/Getty Images)

A Turkish woman holds a placard during a

Gender Equality Universally Embraced, But Inequalities Acknowledged
A Turkish woman holds a placard during a