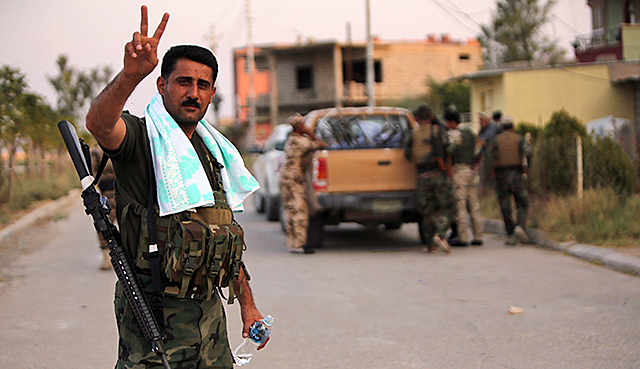 A Kurdish peshmerga fighter flashes the sign for victory after re-capturing the village of Tel Asquf from Islamic State (IS) militants on the eastern outskirts of Mosul Dam, near the northern city Mosul, on August 18, 2014. Kurdish fighters, backed by Iraqi forces and a new wave of US strikes recaptured the major dam which was the biggest prize yet clawed back from the so-called “Islamic State” since it launched a major offensive in northern Iraq in June, sweeping aside Iraqi security forces. AFP PHOTO/AHMAD AL-RUBAYE (Photo credit should read AHMAD AL-RUBAYE/AFP/Getty Images)