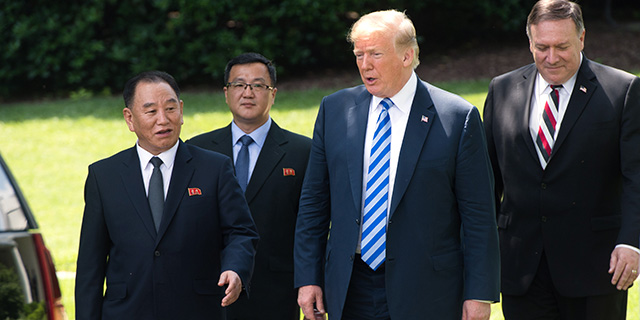 US President Donald Trump speaks with North Korean Kim Yong Chol (L) on the South Lawn of the White House on June 1, 2018 in Washington, DC, after a meeting, as US Secretary of State Mike Pompeo (C) looks on. – US President Donald Trump said Friday his summit with North Korea’s leader Kim Jong Un is back on for next month, after extraordinary Oval Office talks with a top envoy from Pyongyang. Trump emerged after a more than hour-long Oval Office meeting with Kim Yong Chol — a general facing US sanctions who is Kim’s right-hand man — saying that the summit will go ahead in Singapore on June 12 as originally planned. (Photo by SAUL LOEB / AFP) (Photo credit should read SAUL LOEB/AFP/Getty Images)

5 facts about how the U.S. and its allies see North Korea