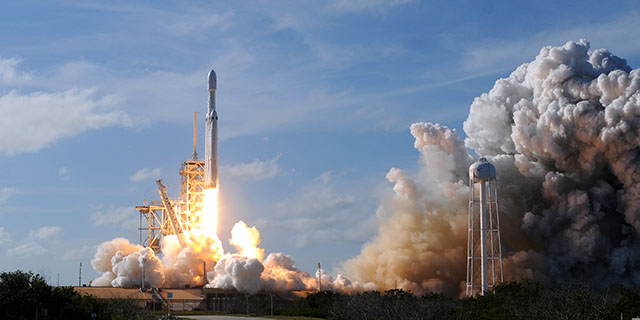 The SpaceX Falcon Heavy launches from Pad 39A at the Kennedy Space Center in Florida, on February 6, 2018, on its demonstration mission.
The world’s most powerful rocket, SpaceX’s Falcon Heavy, blasted off Tuesday on its highly anticipated maiden test flight, carrying CEO Elon Musk’s cherry red Tesla roadster to an orbit near Mars. Screams and cheers erupted at Cape Canaveral, Florida as the massive rocket fired its 27 engines and rumbled into the blue sky over the same NASA launchpad that served as a base for the US missions to Moon four decades ago.
/ AFP PHOTO / JIM WATSON (Photo credit should read JIM WATSON/AFP/Getty Images)