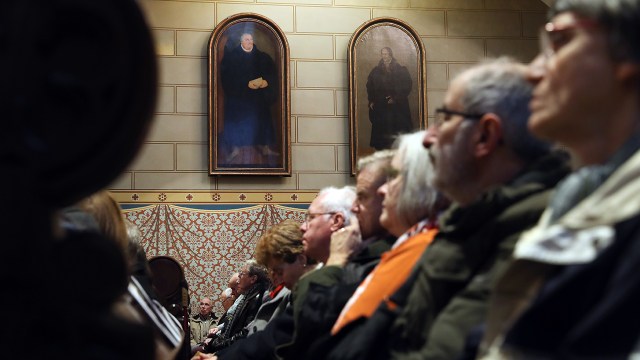 WITTENBERG, GERMANY – OCTOBER 31: Churchgoers attend a Protestant service at the Schlosskirche church under paintings that show theologian Martin Luther (L) and reformist educator and Luther associate Philipp Melancthon during commemorations of the 499th anniversary of Luther’s nailing of his 95 theses on the church’s doors in 1517 on October 31, 2016 in Wittenberg, Germany. Germany is launching the Martin Luther Year today to mark the 500th anniversary of the Reformation that Luther set in motion and that led to the creation of successful Protestant movements in history’s most significant challenge to the Catholic Church. Celebrations and events in Germany and in other countries with strong Protestant traditions will continue through next year. Luther’s translation of the Bible made it accessible to a much broader audience. He spoke out against the practice of indulgences and the sale of relics, and also argued that a place in Heaven is possible not by good deeds but through faith. (Photo by Sean Gallup/Getty Images)

Once a majority, Protestants now account for fewer than a third of Germans
Germany Launches Martin Luther Year To Mark 500 Years Since The Reformation