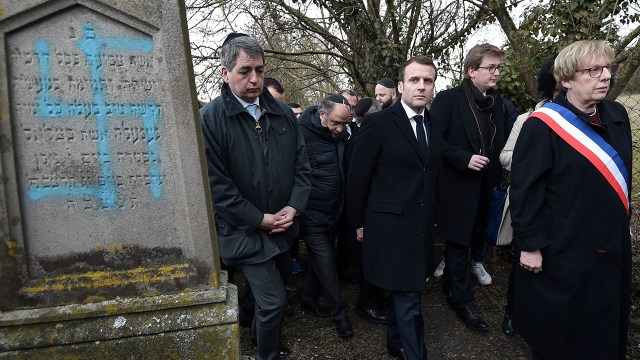 French President Emmanuel Macron (C) looks at a grave vandalised with a swastika during a visit with Quatzenheim’s deputy mayor Josette Prim (R) at the Jewish cemetery in Quatzenheim, on February 19, 2019, on the day of a nationwide marches against a rise in anti-Semitic attacks. – Around 80 graves have been vandalised at the Jewish cemetery in the village of Quatzenheim, close to the border with Germany in the Alsace region, which were discovered early February 19, 2019, according to a statement from the regional security office. (Photo by Frederick FLORIN / POOL / AFP) (Photo credit should read FREDERICK FLORIN/AFP/Getty Images)

Negative stereotypes about Jews are largely rejected in France