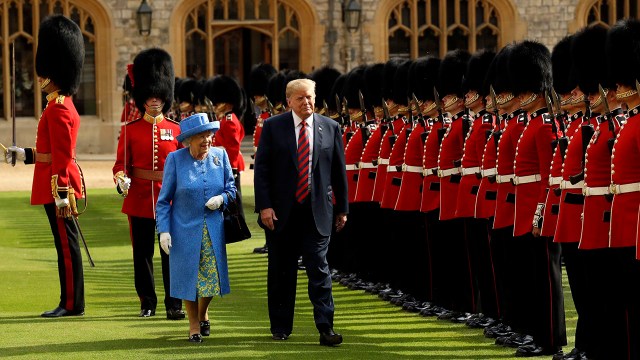 WINDSOR, ENGLAND – JULY 13: U.S. President Donald Trump and Britain’s Queen Elizabeth II inspect a Guard of Honour, formed of the Coldstream Guards at Windsor Castle on July 13, 2018 in Windsor, England. Her Majesty welcomed the President and Mrs Trump at the dais in the Quadrangle of the Castle. A Guard of Honour, formed of the Coldstream Guards, gave a Royal Salute and the US National Anthem was played. The Queen and the President inspected the Guard of Honour before watching the military march past. The President and First Lady then joined Her Majesty for tea at the Castle. (Photo by Matt Dunham – WPA Pool/Getty Images)