One month before the midterm elections, Americans offer harsh judgments on Republicans and Democrats in Washington with roughly three-quarters saying partisans have been bickering more than usual and approval ratings for leaders of both parties in Congress matching long-time lows. 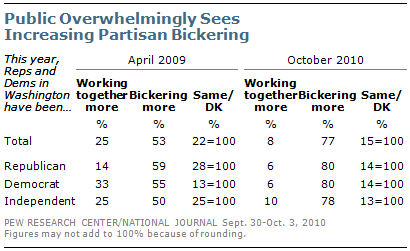 The latest Pew Research/National Journal Congressional Connection poll, sponsored by SHRM, conducted Sept. 30-Oct. 3 among 1,002 adults, finds that 77% say that Republicans and Democrats in Washington have been bickering and opposing one another more than usual. Just 8% say they have been working together more.

The percentage saying Republicans and Democrats have been bickering more than usual tops the 72% that said this in October 1995, when partisan fighting over the federal budget eventually led to government shutdown. At that point, 21% said the parties were working together.

The public’s perceptions have worsened significantly since early last year. In January 2009, when asked about the prospect for bipartisanship in the coming year, fully 50% said they expected Republicans and Democrats to work together more while 39% said they expected increased partisan bickering. But by April 2009, the public was already gloomy about the state of partisan relations: just 25% said the parties were working together more than usual, while 53% said they were bickering and opposing one another more. Since then, assessments have worsened. Only about a third as many people now see the two parties cooperating as did so then.

Lower Ratings for Leaders of Both Parties in Congress 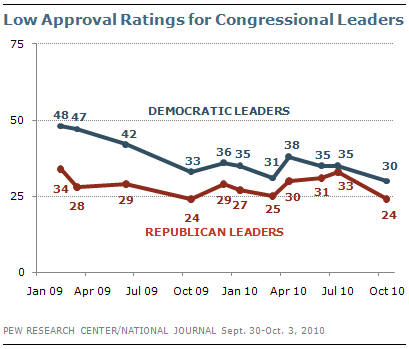 Job approval ratings for both Republican and Democratic leaders in Congress are down slightly from mid-summer. Though Republicans may be poised for major gains in the House and Senate in the midterm elections, just 24% of the public approves of the job being done by the party’s leaders in Congress.

That is down from 33% in July, and equals a low measured at about the same time last year. Disapproval stands at 60%, matching the number from one year ago. Shortly after Barack Obama took office in 2009, approval of Republican leaders stood at 34%.

Job performance ratings for Democratic leaders also have slipped since the start of the Obama administration (from 48% approval in February 2009 to 30% currently). In July, that rating stood at 35%. Still, going into the campaign’s final weeks Democrats’ approval ratings are modestly higher than the ratings for Republican leaders. 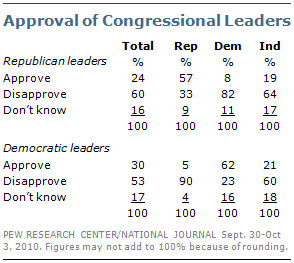 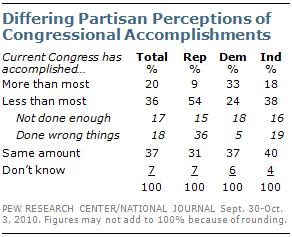 In 2006, when Republicans controlled Congress, partisan assessments were the reverse; Democrats were substantially more likely than Republicans to say Congress had accomplished less than usual.