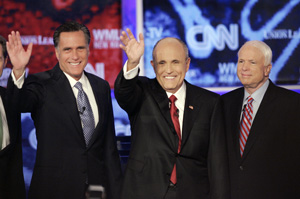 Analysis of a June survey from the Pew Research Center for the People & the Press reveals how support for the 2008 presidential candidates varies among some religious groups.

Hillary Clinton currently generates the most enthusiasm among Democrats in both religious groups for which sufficient data were available. Among Republicans, Rudy Giuliani garners the most support in all three groups.

To find out more about the 2008 presidential candidates’ views on pressing religious issues, from abortion to gay marriage, visit the Pew Forum’s Religion & Politics ’08 home page.